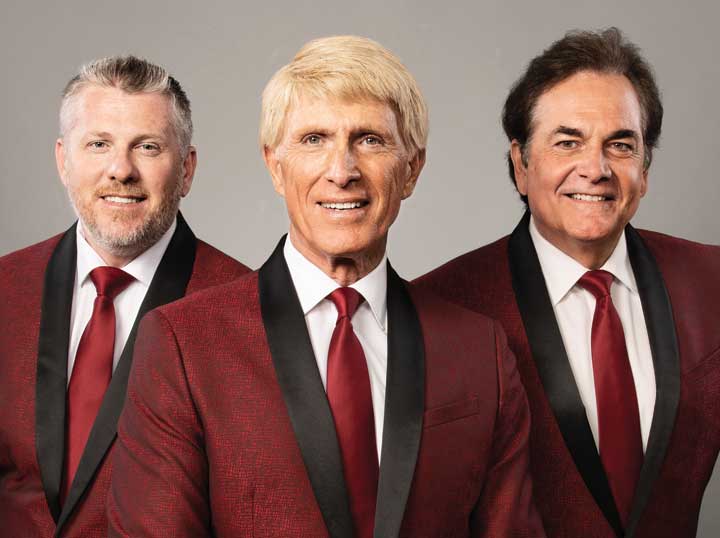 The dictionary defines harmony as “a combination of musical sounds considered to be pleasing”. The music world could define harmony as “The Lettermen”. For more than 50 years, The Lettermen– Donovan Tea, Bobby Poynton and Rob Gulack, each of whom are entertainers in their own right—have kept the meaning of harmony alive with their soft, romantic, harmonic blend of music which is as popular with their fans today as it was in 1961 when they recorded their first hit, “The Way You Look Tonight”.

For The Lettermen debut single record in the summer of 1961, Capitol Records decided to put a romantic ballad on the B-side of “That’s My Desire”, which was an attempt at a doo-wop single, figuring radio stations would have to play the A-side because the B-side was so sweet, and slow, and did not necessarily encompass the commercial sound of the day.

The B-side was “The Way You Look Tonight”. Soft, melodic and romantic, it was a departure from the rock ‘n’ roll music of the day. Eventually listener requests made it a must for radio station play lists nationwide. The song shot to No. 13, on the Billboard chart. The group’s second single that year did even better. “When I Fall In Love,” another soft, slow ballad hit No.7, establishing The Lettermen as the most romantic singing group of a generation.

To their credit, The Lettermen have over 75 albums— numerous certified gold – and a myriad of hits including “When I Fall In Love”, “Come Back Silly Girl”, “Theme From A Summer Place”, “Goin’ Out Of My Head/Can’t Take My Eyes Off Of You”, “Put Your Head On My Shoulder”, “Hurt So Bad”, and “Shangri-La”.

Donovan Tea is the epitome of a true born and raised Texas gentlemen. As the second most tenured member in the history of The Lettermen, his vocal talents have been shared with audiences around the world including Japan, The Philippines, America, etc.

Donovan began performing at the tender age of 17. He has performed in choral groups, television shows, night clubs and cruise ships during the course of his storied career. Besides being a natural performer, Donovan is a prolific published songwriter. Many of his songs have been recorded and some have even been included in Lettermen performances.

In 1984, while Donovan was the lead production singer in the Lido show in Las Vegas, The Lettermen approached him and asked him to travel to Los Angeles where he sang with the group. They found that they had a natural blend and Donovan was honored to be asked to join the group. Donovan is now celebrating 35 years with the Lettermen. Donovan Tea has remained a continuous member of The Lettermen since he joined the group and to this day he still enjoys performing in front of a live audience.

You will find Donovan, during his time off, enjoying his favorite things in life such as spending time with his wife, children, and training horses on his property outside of Nashville, Tennessee.

Bobby graduated with a degree from Illinois W Wesleyan University with a BFA in drama. Once completing his college education Bobby worked on many television movies and theatrical productions. He found that even though he was keeping busy it was never enough.

The opportunity came to audition for The Lettermen in 1988. Bobby enjoyed the traveling and the performing but felt torn between his career and his family. As a result, he decided to put all of his efforts in to raising his family and decided to leave the group in 1995. During this time, besides spending time with his family, Bobby explored various other entertaining avenues. As time went on, Bobby realized that he really missed performing as he did with The Lettermen. As life would have it, his realization coincided with an opportunity to rejoin The Lettermen in 2011. Bobby realized his return to The Lettermen was a true honor and he couldn’t wait for the chance to recreate the magic on stage and in the recording studio.

After 40 years in show business Bobby still realizes that the most important things in his life are his wife, children and family. Bobby finally found the balance between performing and family, and he couldn’t be happier.

Rob Gulack came to The Lettermen after an exhaustive nationwide talent search in 2019. To quote Rob, he says “I’m now ready to begin this next chapter in my life on the road again with the world renowned Lettermen”.

Music has always played an important part in Rob’s life. When in college he performed in a choral group that traveled through central and northern Europe on multiple occasions, singing at some of the most prestigious cathedrals on the continent.

Rob signed his 1st recording deal in 1997 which included singing multiple styles of music for a movie soundtrack division. Rob ultimately missed live performing and decided to get back out there in front of the audiences he loved. Once again Rob became a live performer. During this time, Rob had a young family and it became more difficult to be away from home. He painstakingly made the difficult decision to step back from music industry and focus on his family and a new career opportunity that would keep him closer to home.

As time went on Rob began writing, and performing, again in Southern California with a classic rock band. This allowed him to keep music and performing very near and dear to his heart, while at that the same time remaining focused on his family.

When the opportunity came along to explore the possibility of joining The Lettermen, he decided to take the chance and see if he could, at this time in his life, fulfill his life’s passion. After almost giving up hope on the dream that was always in his heart, the door finally opened for him and he wasn’t going to miss out by not taking the chance. Of all the applicants in the nationwide search, Rob stood out with a voice and a personality you could not over look.