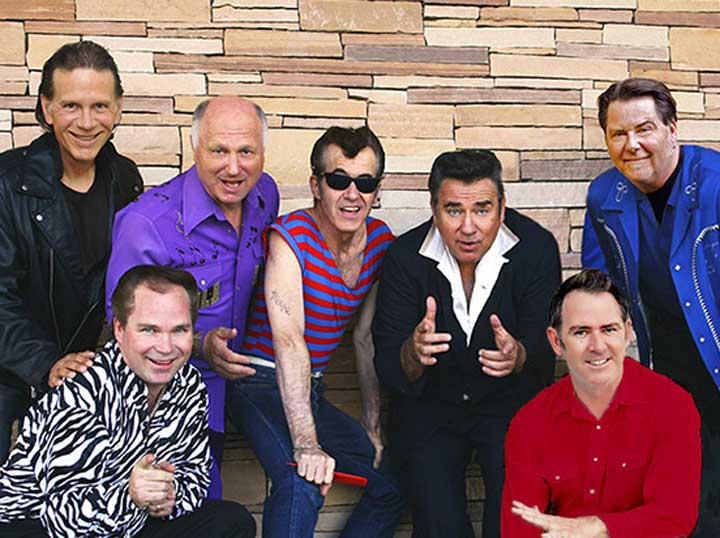 Sha Na Na knows two things for sure: Rock & Roll is here to stay and Grease is still the Word!

SHA NA NA Rock & Roll doo-wop legends, SHA NA NA combined their love for the classics of rock & roll with a dynamic theatrical approach as fellow college students at Columbia University in New York in 1969. They appeared just before Jimi Hendrix forty-five years ago at The Woodstock Festival in their eighth professional gig (of course the check bounced).

The band rose to stardom with their portrayal of Johnny Casino and the Gamblers in the movie Grease – the highest grossing musical film of all-time – and with four seasons of their own worldwide television series, The Sha Na Na Na Show. Sha Na Naperformed six songs on the Grease soundtrack and the song “Sandy,” sung by John Travolta, was co-written by the band’s piano man Screamin’ Scott Simon.

Their latest release Sha Na Na – Greaser High School Hop, featuring 25 signature songs, is music for an instant high school hop dance party. “The Bop,” “The Twist,” “The Stroll,” “The Hand Jive,” “The Monkey,” “The Jerk,” “The Cha Cha,” and even “The Hokey Pokey” are among the great dances of the ‘50s and ‘60s celebrated by Sha Na Na in this collection. The album is available on iTunes, amazon.com, and the band’s website –www.shanana.com.