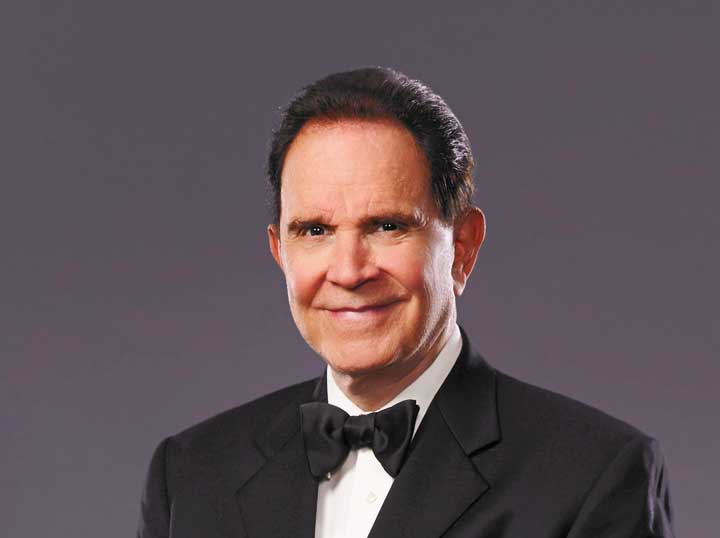 A master mimic of more than 200 voices, Little continues to impress with a touring schedule throughout the United States and Canada.

Infamous for his skewering of political figures, Little has charmed, amused, intrigued and gotten the best of politicians from here to his native Canada. He entertained at both of Reagan’s presidential inaugurations and got to know the Reagans very well during that time. President Reagan used to tell Little, “You do me better than I do.”

Some of his favorite current impressions are of stars Arnold Schwarzenegger, Sylvester Stallone, Jack Nicholson, and Clint Eastwood. “They’re easy to do,” he says. “They are larger than life.”

Little says, “An impression is what you think a person sounds like. It could be an exaggeration or a cartoon. It’s your impression. I think of an impersonation as more of an exact copy. Knowing the person personally is not important; it’s knowing the speech patterns and mannerisms [in order] to imitate the person the way the public sees him.”

It took him seven years to perfect Frank Sinatra, but only several minutes to mimic Dr. Phil.

The son of a doctor in Ottawa, Little started his “career” at the age of 12 when he answered back to his teachers in their own voices. Observing the teachers in action was infinitely more fun than paying attention to class work. To get dates, he’d find out a girl’s favorite actor, then call her up imitating that actor’s voice. Then when Little showed up, he’d say, “Sorry, Cary [Grant] can’t make it.” This stopped when a girl told him her favorite was Lassie.

Little’s first appearances were in a small club in Canada. “I got booked into this place in Quebec, and when I started my act, I discovered that no one in the audience understood English. It was strictly a French-speaking audience.” He figured he was dead until an inspiration hit him. “I did walks – Jack Benny’s walk, Bob Hope’swalk, John Wayne’s walk. They all walk the same in any language,” he recalls.

Impressions came in handy to Little while working as a disc jockey and talk show host. During one April Fool’s Day marathon, he had “Jimmy Durante” emcee the morning show, “Julia Child” do a cooking show and “Elvis Presley” host a teenage show. Like the infamous 1939 broadcast of War of the Worlds, 500 autograph-hungry Elvis-believing fans besieged the station, thinking the King was really there. When they found out it was Little, the fans started throwing things at him.

Still in his early 20s, Little was discovered while working in the United States. His friend, singer Mel Torme, then on the musical team of CBS network’s The Judy Garland Show, asked him to make a tape. Instead of the usual impressions, Little did voices nobody did, including Alfred Hitchcock, Orson Welles and Dennis Weaver. Garland thought it was great, particularly his James Mason, and Little was signed to the show.

Appearances on TV variety shows starring Ed Sullivan, Jackie Gleason, Glen Campbell and Dean Martin followed, as well as on series such as Laugh-In, The John Davidson Summer Show and as a regular on The Julie Andrews Show. Little also had his own variety show in the 70s and was the star of the TV show KopyKats. Little was a guest host early on for The Tonight Show, hosting 12 times. He quickly became a household name sitting in one of the Hollywood Squares and went on to do The Muppet Show.

Named “Comedy Star of the Year” by the American Guild of Variety Artists, Little was the perpetrator of nine comedy albums and three HBO comedy specials, as well as the Emmy-award winning specials Rich Little’s Christmas Carol with “W.C. Fields” as Scrooge, “Humphrey Bogart” as one of the ghosts and “Paul Lynde” as Bob Cratchit.

One of his appearances on HBO was as Johnny Carson in the movie The Late Shift, which dealt with the race to succeed Carson on The Tonight Show. Little has appeared on the daytime soaps The Young and the Restless and Santa Barbara. He has made dramatic guest shots on Fantasy Island, Chips, Murder She Wrote, Hawaii Five-O, MacGyver, Police Woman and Mannix.

Little’s expert impressions have also been used seriously, such as the time he stepped in for stars that were unable to do their own re-dubbings on soundtracks. David Niven’s vocal cords were gone due to illness in his last film, Curse of the Pink Panther and Peter Sellers himself was gone by the end of The Trail of the Pink Panther, so Little provided both voices for these films. The television series Mickey Spillane’s Mike Hammer needed voice-over narrations on three shows, but star Stacey Keach was unable to do them. Little was called in to finish the job. He also did Gene Kelly for a Christmas special when Kelly lost his voice; and more recently, Ernie Borgnine for the animated Cranky’s Miracle after he passed away.

In June 1998, Little’s star was added to the Canadian Walk of Fame to go along with his current stars on the Hollywood Walk of Fame, Palms Springs Walk of Fame and Las Vegas Walk of Fame; one of the few, if not the only celebrity to achieve all four.

In 2003, Little wrote a one-man play entitled, Jimmy Stewart and Friends in honor of this beloved actor and dear friend.  The story of Stewart’s amazing big screen career, his military record and his family life, including many celebrity impersonations, was met with rave reviews during a decade of touring at performing arts centers.  He’s currently working on a project to record it for television.

A little known fact about Little is his other talent as an artist.  He started sketching when he was young, drawing his family and friends.  To date, he has drawn more than 100 pictures of all the celebrities and politicians he imitates, and displays several of these life-like charcoal sketches in his shows.

In January 2010, Little became a United States citizen and was sworn in, with a suggestion from the judge to do it as John Wayne! His wife at the time, Marie, passed away that year. In her honor, Little created the Marie and Rich Little Foundation,  which focuses on helping children, the homeless and animals in need.

Rich is also very supportive of Wounded Warrior Project and other causes for the armed services. 100% of  proceeds from the sale of merchandise at his performances are donated to WWP.

Little has two daughters: Bria, an award-winning horse jumping trainer, and Lyndsay, who works in marketing. He also has a granddaughter, Alaina. Little has been married four times.

He currently resides in Las Vegas, Nevada. When not working, he spends most of his time with his one-eyed cat, T-Bo and his family and friends.

Little is still currently working on his latest project, “Little by Little” a self-written, humorous show about his life, featuring over 30 characters.  A book of the same title (…Celebrities I’ve Known and Been) is due to be released in fall of 2015.