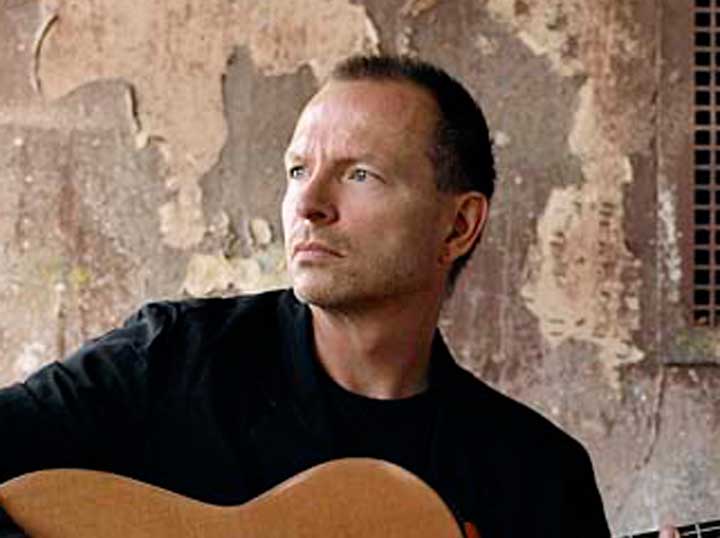 Liebert’s incredible global success on a musical level often seems like a simple outgrowth of his cultural background and powerful wanderlust in his formative years. Born in Cologne, Germany to Chinese-German father and Hungarian mother, he began playing guitar at 11, and traveled extensively through Europe and Asia intent on fully absorbing each musical tradition he encountered. After pursuing his Rock and Roll dreams first in his native Germany and then in Boston, he abandoned the frustrations of the East coast and settled in Santa Fe, New Mexico.

By 1989, he had founded the first incarnation of his new band Luna Negra. Nouveau Flamenco began life as a self-produced local release called Marita: Shadows and Storms, copies of which local Indian artist Frank Howell distributed in his art galleries. When the record found its way to radio stations and began generating a buzz among programmers and an unprecedented response among listeners, Higher Octave Music picked it up and released a fully remastered version.

“I was honestly happy playing this music in hotels and restaurants in Santa Fe, and going in one year from doing that to opening for Miles Davis was a pretty intense jump,” he recalls. “Most shocking for me was to realize how many different people from so many diverse cultures embraced it. I still get letters from fans in Europe, South-America, Australia, and Asia…it’s been a really gratifying experience. I’ve had the opportunity to play in a wide variety of cultural settings with musicians from around the world, and that has been a great experience, too.”

Liebert has since become one of the most successful instrumental artists of the past decade, thrilling audiences throughout the world and releasing a catalog of classic recordings, including the remix collection Euphoria (1995), the live album Viva! (1995), the double CD Opium (1996) and the classical-oriented orchestral album Leaning into the Night (1997). He wrapped up his decade with Epic with 2001’s Little Wing and went back to Higher Octave Music, releasing a lush album of lullabies called In the Arms of Love in 2002 and an album with Luna Negra XL called The Santa Fe Sessions (2003).

La Semana (2004) was the first all-new band album in five years, followed by Winter Rose (2005), which featured original pieces, classical music and christmas songs. In 2006 Liebert’s record label SSRI released One Guitar, his first solo guitar recording, which received Liebert’s fourth nomination for a Grammy. His newest releases are Up Close (2008), which is a binaural dummy head surround sound recording, and The Scent of Light (2008) a labor of five years.