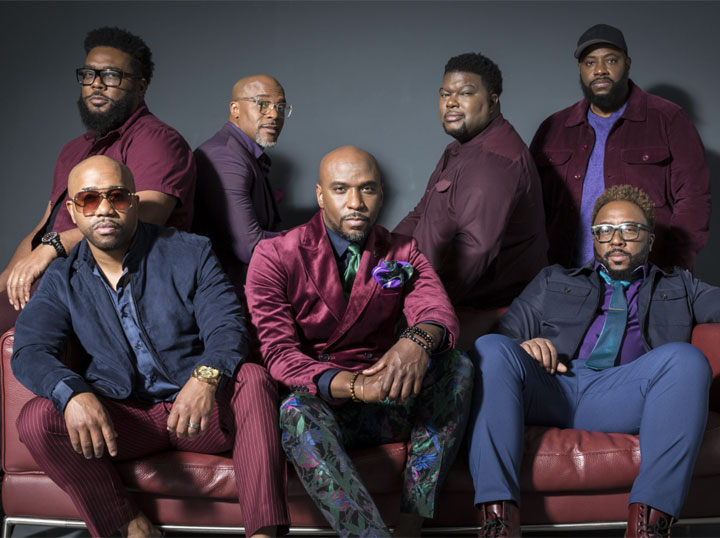 “The Best Cappella Group in the World”
– Quincy Jones
BIO

Certain experiences burn themselves in your memory from the very first encounter. The jaw-dropping audio pyrotechnics that Naturally 7 put on display every night absolutely belong in that category. “A capella group” so vastly underplays what they create onstage that they had to coin a phrase – “Vocal Play” – to more accurately depict what they do. Naturally 7 is more than a tightly orchestrated collection of great singers. They transform their voices into actual human instruments, effortlessly producing music of any genre. Their vocal choreography is so perfectly interwoven that they compelled the musical maestro himself, Quincy Jones, to declare them “The best a cappella group in the world!” Their sonic mastery was on full display in a series of unforgettable performances on “The World’s Best” TV show, which premiered on CBS immediately following Super Bowl LIII. Hosted by comedian and “Car Karaoke” collaborator, James Corden, Naturally 7 reigned supreme as the world’s “Best Group”, and cemented their singular status among the planet’s musical elite.

This was only icing on the cake of a still-vibrant 20-year career, which includes 3 world tours – nearly 500 shows – with the incomparable Michael Bublé, shared billing with global phenomenon Coldplay – including a sold out show at the Barclays Center – and owned the spotlight in a pair of national Cheerios commercials. In addition to Bublé, Naturally 7 has shared the stage with numerous icons, including Stevie Wonder, Diana Ross, Quincy Jones, Sarah Connor, Lionel Richie, Ludacris, The Roots, and more. Counted among their world-famous fans are President Barack Obama, Will.I.Am., Ellen DeGeneres, Craig Ferguson, Bill and Melinda Gates, Jay Leno, Allan Titchmarsh, Mo’Nique, Jools Holland, and Arsenio Hall, along with countless others.

A lot can happen in 20 years. From simple beginnings, two brothers and five friends have become a vocal phenomenon that has toured the world, blown audiences out of their seats, and completely redefined what is possible with something as basic as the human voice. Perhaps that’s what Roger Thomas envisioned in 1999 when he recruited his brother to become the drummer for his vocal band. At that time, the group was called Last Appeal, and was building a strong local following around the city of New York. That year would end with them being crowned the winner of the prestigious National Harmony Sweepstakes a cappella competition, and recording their first album, entitled “Non Fiction”. In less than two years they would be touring full-time around the country, doing more than 150 shows per year on the College & University circuit.

Riding the wave of new-found popularity, Naturally 7, as they were now known, was signed to their first major label deal, with Sony Music Transglobal, in 2002. For a group that was founded in the U.S., they quickly found increasing success on the international stage. The following year saw another set of firsts for the group, as they would notch their first of many international Number 1 records, Top 40 records, and sold out tours. Over the next few years they would become fan favorites in multiple countries, and staples on the music charts.

By 2006, when Naturally 7 signed a new deal with EMI Music, they were prepared to drop their 3rd studio album “Ready II Fly”, and notch another International Number 1 song, topping the charts in South Africa and France with their original cover of Phil Collins’ classic “In The Air Tonight”. Naturally 7 would also break new grounds in the digital arena, as a spontaneous performance in a Paris subway would go on to become one of the first viral videos on a fledgling YouTube platform, and would amass more than a then-unheard of 1 million views in less than 2 days on other platforms as well.

The following year would see them embark on the first of what would eventually become four world tours, with superstar Michael Bublé. Since then they’ve gone on to sell out nearly 500 shows in arenas & stadiums worldwide, while recording several duets on both theirs and his albums. More acclaim and popularity would come in 2008, as the release of their single and video for “Wall of Sound”, from the album of the same name, landed them on The Ellen DeGeneres Show, The Tonight Show, and The View on back-to-back days.

A once-in-a-lifetime opportunity to perform with musical icon Quincy Jones for his 75th birthday celebration led to the subsequent recording of the title track for Jones’ next album, “Soul Bossa Nostra”, and a TV performance with him and Ludacris on The View in 2011. Always aiming higher, Naturally 7 would sign a new deal with Universal/Hidden Beach in the following year, and own the spotlight in two national Cheerios commercials. By 2014, they were featured as special guests of iconic rock band Coldplay for three shows, with the final one playing at the Barclays Center. Naturally 7 was now an absolute force to be reckoned with.

In 2017, the group signed its latest deal with BMG and, with a headlining show at the Walt Disney Hall in Los Angeles, California, added to the prestigious list of legendary venues at which they’ve performed, including Carnegie Hall, Madison Square Garden, and The Lincoln Center. Naturally 7 has been featured on some of the biggest shows in the world, such as the Vancouver Winter Olympics in 2010, the Indianapolis 500 in 2016, the FIFA Awards in 2017, and numerous other television appearances, commercials, and promotional events. Perhaps most importantly, these past 20 years have afforded Naturally 7 numerous opportunities to lend their talents in support of causes for children with World Vision, the Bill and Melinda Gates Foundation, STOMP OUT BULLYING, and many other worthy initiatives.

Through the years, the band continues to wow crowds around the world with their amazing stage show, and astonishing vocal theatrics, leaving audiences both speechless, and eager to mimic their favorite moment of the one-of-a-kind experience. For the members of Naturally 7 – “Ricky“ Lee Ricardo Cort, Rod Eldridge, Kelvin “Kelz“ Mitchell, Sean Simmonds, Dwight Stewart, Roger Thomas, and Warren Thomas – it’s a privilege to do what they love and bring so much joy to the hearts of their fans each and every night. Naturally 7 still tours and performs more than 150 shows a year.

In describing the legacy of the group he founded, Roger Thomas sounds reflective in his tone: To me, we’re a band that has thrived on the cutting edge of vocal group genre. Our aim has always been to leap far beyond what any audience would ever expect from 7 voices. But as high as “Entertainment” is on our list, we still feel that our biggest offering is music that uplifts and changes lives! With these two ingredients we have made it our goal to bring back the forgotten Golden Age of Vocal Groups. We just want to continue carrying the banner of musical excellence for generations to come.”

With the release of their latest project, 20/20, Naturally 7 comes full circle, adding a fresh spin on 20 fan favorites, hand selected by fans the world over. This, their eleventh studio album, celebrates their 20th anniversary in the music industry, giving music lovers all they could hope for, and then some. It’s exactly what you would expect. When something is pure magic it’s destined to withstand the test of time. Naturally… Naturally 7.