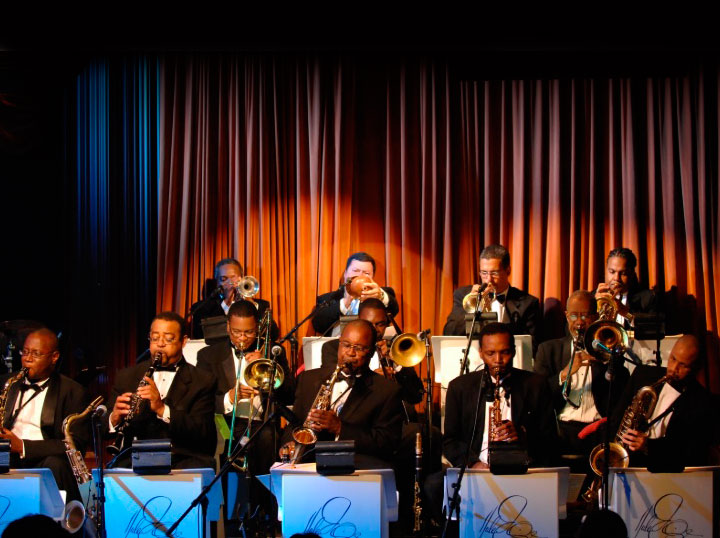 One of the greatest American jazz composers, pianist and bandleader of his time.

Edward Kennedy “Duke” Ellington born April 29, 1899 is regarded as one of the most prolific American composers of the Twentieth century. His career spanned more than 50 years and included leading his orchestra, composing an inexhaustible songbook, scoring for movies, composing stage musicals, and world tours.

Duke Ellington called his music “American Music” rather than jazz, and liked to describe those who impressed him as “beyond category.” He remains one of the most influential figures in jazz, if not in all American music, and is widely considered as one of the Twentieth century’s best known African American personalities. As both a composer and a band leader, Duke Ellington influenced millions of people both around the world and at home.

He gave American music its own sound for the first time. In his fifty year career, he played over 20,000 performances in Europe, Latin America, the Middle East as well as Asia. Ellington led his band from 1923 until his death on May 24, 1974 at the age of 75. At this point, his son Mercer Ellington took leadership of the band. Mercer was an accomplished trumpet player and composer who wrote many songs for his father’s orchestra including the standard “Things Ain’t What They Used to Be.” In the early 1980s he became the first conductor for a Broadway musical of his father’s music, Sophisticated Ladies.

Under his direction he toured and recorded the Orchestra for the next 22 years until his own death in 1996. At this point the baton was passed to Mercer’s youngest son Paul Mercer Ellington who has been leading the orchestra and fearlessly preserving the music and legacy of the great Duke Ellington. The Duke Ellington Orchestra has been performing worldwide for the past 88 years under the guidance of three generations of the Ellington family and will continue to do so for many years to come.

For the past three years while Paul is at New York University studying for his Masters degree in Film Production, Charlie Young the very talented alto sax player and arranger and professor at Howard University has been acting as the conductor touring the world leading the Famous Duke Ellington Orchestra.